You can get to mainland Portugal a number of ways, probably the easiest and quickest is to fly. Flights from the United Kingdom to Portugal take on average about two and half hours, though this depends on your destination airport.

Portugal by Air: The country has three international airports: Faro in the Algarve; Lisbon in Central Portugal and Oporto, to the north. All three airports are operated by ANA Aeroportos de Portugal, a state owned authority.

Lisbon Portela is the busiest airport in Portugal, with both passenger and cargo levels increasing rapidly. Although schemes are in place to increase Portela’s capacity, the Portuguese government are investing in the construction of a new airport to eventually replace it. The government chose the site for this new airport in 1999 to be at Ota, a district 50 kilometres north of the capital.

expected it will be able to accommodate Boeing 747s and possibly the Airbus A380. The Portuguese TGV high speed train will have a stop at Ota with connections to the rest of the country. Ota Airport will connect to the A1, which is the major north/south road and has connections to other principal highways.
Portugal by Train

Eurostar has made it possible to get to Portugal on a train if you are travelling from the United Kingdom. For more details and prices consult Rail Europe’s website.

The railway system in Portugal is quite extensive and is inexpensive to use. The Alfa Pendular trains offer a fast rail link from Lisbon to the Algarve and to the North – Porto, Braga and Guimarães. There is a vast network of regional, inter-regional and suburban trains covering the country.

If you are planning to drive to Portugal, taking a car ferry from the UK to northern Spain is a leisurely option. P & O Ferries sail from Portsmouth to Bilbao in around 30-36 hours, twice a week. Brittany Ferries sail from Plymouth to Santander in about 21 hours twice weekly. Once docked in Northern Spain there are good road links to Portugal. To reach central Portugal takes approximately seven to eight hours by car from Bilbao.

If you are moving to Portugal, or just coming for a visit and you are thinking of driving there are a few things to take into consideration. When driving in Portugal it is law to carry the following items: warning triangle, a reflector jacket and all documents ie. registration, tax, insurance and driving licence. If you don’t you are liable to an instant fine.

An historic four bedroom detached manor house with 9755 square metres of land for sale near Torres Novas in central Portugal. 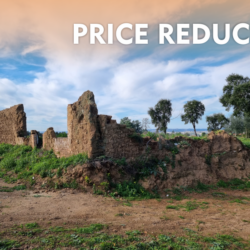 PRICE REDUCED - Property with a ruin and project approved, for sale, near Tomar